If you've been craving the richest, most decadent ice cream imaginable then this cinnamon gelato recipe is one you have to try now! The smooth creaminess of the gelato and the delicate cinnamon flavor combine to make this homemade gelato recipe one you'll make again and again.

I've had this recipe sitting in the queue for a while and I suddenly realized that here we were in mid-September and if I didn't get this to you now I might as well wait until next year... and that would be a travesty. You see, this cinnamon gelato recipe is exactly what you want to make to go with your apple pies and pumpkin pies this fall. It's absolutely, indescribably delicious and will make that lowly scoop of vanilla ice cream blush with shame.

The rich creaminess is your introduction to this frozen treat. Even before you taste it you can see the way your spoon slides through the tawny scoop. The cinnamon flavor is delicate and sweet at first, intensifying in flavor with every bite. It reminds me of Horchata at first but it has much more substance.

Breville sent me an ice cream maker a few months ago and I am totally spoiled now. You can read about it on my Ginger Peach Sorbet post.

You can absolutely make this cinnamon gelato recipe with ANY ice cream maker so don't worry if you don't have a Breville! Make it anyway!

The following are affiliate links. We are a participant in the Amazon Services LLC Associates Program, an affiliate advertising program designed to provide a means for us to earn fees by linking to Amazon.com and affiliated sites. Thanks so much for being a part of Restless Chipotle!

I love my Breville Ice Cream Maker! It has it's own compressor built in so you don't need to freeze bowls or anything. You just set the type of frozen treat you want and let the machine create it. Vietnamese cinnamon has more flavor than the normal cinnamon you find at most grocery stores. Try it once in this homemade cinnamon gelato recipe and you'll understand!

Make some time in your schedule to give this luscious homemade cinnamon gelato recipe a try. It's absolutely beautiful to look at and really, once you've eaten it, you'll be spoiled for anything else. What's your favorite ice cream flavor? Leave a comment and let me know! 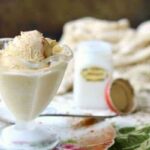 This recipe is part of Meal Plan Monday#80. Check out all the awesome recipes.