Big, fluffy homemade cinnamon rolls with toasted pecans and a thick, gooey icing - they rise overnight in the refrigerator so they're perfect for weekends!
Total time 45 minutes
Jump to Recipe

Absolutely the best homemade cinnamon rolls recipe ever - and they're Texas sized! Soft, buttery rolls have a thick ribbon of spicy cinnamon filling and a generous amount of toasted pecans. After they're baked to a golden brown (and the kitchen smells like heaven) gooey vanilla butter icing is spooned on while they are still warm then more pecans are sprinkled over the top. These cinnamon buns are crazy easy and you'll never want Cinnabon again! This post has been updated from the October 2014 version.

I know as soon as I say that there will be some whackadoo that pipes up and tells me how much they hate them... So I'm sure there are those sort of people. To me they sort of spell out the Roget's thesaurus version of "I love you."

Well, with these cinnamon rolls it's more like: "I love, adore, cherish, like, affect, fancy, care for, take an interest in, be partial to, sympathize with; affection; be in love with; have a love for, entertain a love for, harbor cherish a love for; regard, revere; take to, bear love to, be wedded to; set one's affections on; make much of, feast one's eyes on; hold dear, prize; hug, cling to, cherish, pet, burn; adore, idolize, love to distraction, dote on, dote upon, take a fancy to, look sweet upon; become enamored; fall in love with, lose one's heart; desire... you."

They're big as Texas, sweet as a baby kiss, and easy as pie. It's like biting into a cloud of sweet, buttery, cinnamony perfection. And there are pecans - masses of them. Chop them up but leave big chunks of pecan so that you get a good taste of it in every bite.

It's your choice. You can make those other kind of cinnamon rolls (or buy them, even) or you can make these. I suppose some of it depends on how many synonyms you have on hand to describe your loved ones.

I swear, here in Texas pecans go in everything from chicken salad to ice cream. They are just so good! We've got several native trees on our property and the nuts are so high in flavor that you wouldn't believe it. It's just a challenge to try to get them before the squirrels and worms.

Level: average - as long as you follow the instructions you'll be fine. If you need a refresher course check out my yeast baking series.

You can make these the night before and let them rise overnight in the refrigerator. Honestly that is my preferred way to make any sort of breakfast roll because the slower rising time gives all of the flavors a chance to mellow out plus you end up serving hot rolls for breakfast and that makes you look good - real good.

How to Store Homemade Sweet Rolls

You can store these in a variety of ways -

How do you make homemade cinnamon rolls?

It's easy to make these cinnamon rolls. In fact, you can make them with just about any bread dough that you happen to be working with (in a pinch you can even use frozen bread dough).

How long does it take for cinnamon rolls to rise?

About 1 hour for the first rising and 30 minutes for the second. The actual time will depend on the temperature of the room they're rising in. If you are letting them rise in the refrigerator overnight then that's the only rising time they really need.

How long will cinnamon roll dough keep in the fridge?

About 3 days if you punch it down once every 24 hours. After that it starts losing it's ability to rise.

How do you make easy cinnamon roll icing?

There are a lot of types of icing to use on cinnamon rolls. The one I share with this recipe is the easiest because it's just three ingredients.

What is a good substitute for powdered sugar?

If you're out of Confectioner's (powdered) sugar you can try this easy substitute. Just blend 1-½ cups regular sugar and 1 tablespoon of cornstarch in a blender until powdered. It will take about a minute. Use as you would Confectioner's sugar.

How do you keep cinnamon rolls fresh?

Keep them tightly covered. If you won't be eating them in a day or two it's best to freeze them.

If these aren't quite what you're looking for here are some more homemade sweet roll recipes you might like...

What's new? A brand new store full of things to help you make the recipes, celebrate the days, and create the memories! Check out Restless Chipotle & Co. As always, thanks so much for being a part of Restless Chipotle!

I love my vacuum sealer. I can easily freeze things like these cinnamon rolls for longer periods of time without worrying about freezer burn. This vacuum sealer is compact enough for the tiniest kitchen.

These easy cinnamon rolls are about to become your family's favorite! They are so big and fluffy - fantastic on a brunch table. If you love this recipe please give it 5 stars below.

Store them, tightly covered, at room temperature for no more than 2 days. Freeze for longer storage. 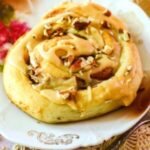 *Add 8 hours overnight time to the rising time if you'll let them rise overnight. For smaller rolls roll out a larger rectangle and cut into 24 rolls - half the calories. **To toast pecans place them on a heavy cookie sheet in a 350F oven for about 5 to 10 minutes stirring every minute or two until toasted. Watch that they don't burn!

We'll never share your email or send you spam. Pinkie swear.
« Classic Swiss Steak in a Slow Cooker or Oven
Mac and Cheese with Pulled Pork »