When it's time to step in and own the dessert table you'll want to show up with this creamy cinnamon roll cheesecake. Layers of classic vanilla cream cheese filling and brown sugar cinnamon crumble are baked in a cinnamon roll crust and topped with gooey vanilla icing.
Total time 10 hours 25 minutes
Jump to Recipe 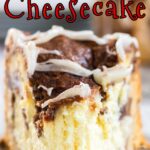 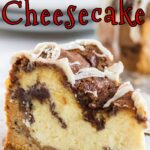 Next time try the Irish Cream cheesecake! You'll find more great recipes like these in the cheesecake category.

A crunchy cinnamon crumble bakes right on top then a rich vanilla icing is drizzled over the top after baking.

My techniques and tips will ensure that your cheesecake is always super creamy and doesn't crack on top!

If you don't want to use the cinnamon rolls you can make a cinnamon graham cracker crust!

Note: This is an overview of the instructions. The full instructions are in the green recipe card below.

Expert Tip: You want cinnamon roll cheesecake to be dense so it's very important to never mix it on anything other than low speed with the paddle to keep as much air out as possible. Never whip or beat cream cheese!

Here are the questions I am most frequently asked about this recipe.

How should I store cheesecake?

Homemade cheesecake shouldn't be left at room temperature for more than a couple of hours. Cover well and store in the refrigerator.

Can cinnamon bun cheesecake be frozen?

Yes. Allow the cheesecake to chill overnight as in the instructions. Once chilled wrap it well in plastic wrap then aluminum foil. Freeze for up to 3 months.
To thaw just transfer it to the refrigerator and let thaw overnight.

The main issue I had the first time I made this was that the cinnamon rolls puffed up too much in the crust and make more of a bread layer than I really wanted.

Make sure you roll them really thin and then press them down after baking if you need to - or just use cinnamon graham crackers for a crust.

If you love this recipe please give it 5 stars! ⭐️⭐️⭐️⭐️⭐️ 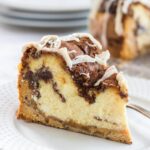 Expert Tip: You want cheesecake to be dense so it's very important to never mix it on anything other than low speed to keep as much air out as possible. Never whip!