Moist, fudgy chocolate cake with a touch of cola flavor filled with a thick, rich chocolate and cola filling and then frosted with a light cloud of cola flavored marshmallow icing. Top it with crushed peanut brittle for a new twist on an old fashioned treat.
Total time 45 minutes
Jump to Recipe

Putting salted peanuts in your coke is a southern thing. No one really know how the practice started but it is brilliant - that perfect salty sweet taste with the added blast of fizz. Anyway, back in the 1970s it was a pretty cool thing to do, and being the cool person I was - I did it. I also put them in my beer but that is an entirely different story. 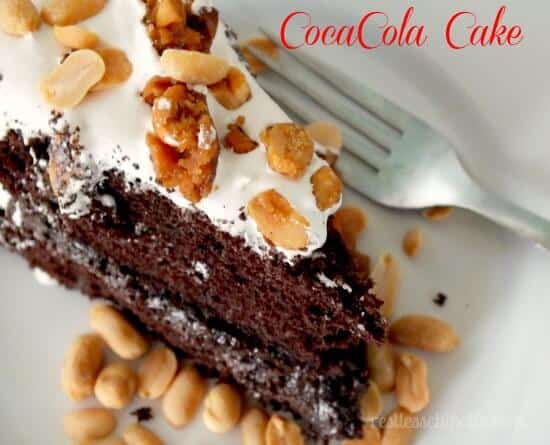 Back then Coke and everything else was made with sugar and served up in thick, greenish glass bottles. I know it might sound stupid but I think that cokes of any sort taste best in glass bottles. The plastic just doesn't do the job. You used to be able to walk into a little gas station or little corner store and grab a coke out of a bucket filled with crushed ice. The  drink was so cold that when you opened it up there was slush on the top of it - and nothing tasted better on a 110 day than one of those cold cokes - with a bag of peanuts floating on the top.

I think Coke tasted different back then. It was peppery and so full of fizz that the bubbles tickled when you took a swig. Although I worked quite a lot, whenever I got a Saturday off I headed for Kiest park, a local park where we all hung out. I had a 77 Monte Carlo with a T-top and cruising around in that was pure hotness and I don't mean the temperature. Halter tops, cut-off shorts, Farrah Fawcett big hair, and Kissing Potion lip gloss in Cola flavor were standard items for these no-holds-barred weekend parties. 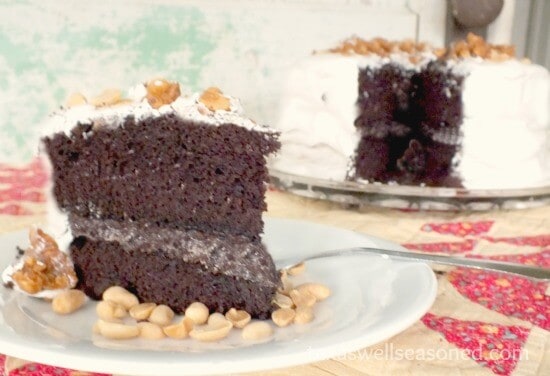 Double fudge Coca Cola cake, Yes, I went there. Oh my gosh, it is so chocolaty, moist, and addictive. You get the rich chocolate, the intense sweetness, and then the salt. Give this a try. It isn't difficult to do. You can use either homemade peanut brittle or use some good quality brittle from the store. If you make it homemade add a sprinkle of salt crystals while it is cooling.

By the way - yes I do know that the watermark on the second image says Texas Well Seasoned... Remember? I am condensing two blogs into one. 🙂

This cake is moist and rich. The layers are brushed with Coca Cola when they are still warm. You make both a fudge filling and a marshmallow type frosting - both with cola flavor... No Coca Cola cake has much cola flavor but this one has more than most. I think you will enjoy it. And, the next time you pop the top of an ice cold "Co-Cola" pour ya in some salted peanuts. 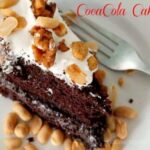 Print Save Go to Collections
Prevent your screen from going dark
Moist, fudgy chocolate cake with a touch of cola flavor filled with a thick, rich chocolate and cola filling and then frosted with a light cloud of cola flavored marshmallow icing. Top it with crushed peanut brittle for a new twist on an old fashioned treat.
Prep Time: 15 minutes
Cook Time: 30 minutes
Total Time: 45 minutes
Servings:8 to 10 servings
Calories:
Author:Marye Audet-White
As an Amazon Associate I earn from qualifying purchases.

Do not make substitutions in this recipe.

If you like Double Fudge Coca Cola Chocolate Cake with Salted Peanut Brittle, you may also like...