An unusual, flaky cinnamon bread that is formed into a spiral before baking. Break off pieces of the spiral and eat it warm.
Total time 2 hours 15 minutes
Jump to Recipe

Noon Rogani is a sweet, cinnamon bread from Azerbaijan near northwestern Iran. What's unique about it is the shaping — and what happens once the bread is shaped and baked.

You see, you make it like a regular dough, sprinkle with cinnamon and sugar, and then form it into a roll. Pretty standard stuff, right? THEN you roll the Noon Rogani beneath the palms of your hands. Remember making long ropes with Play-do? Well, that's exactly what you are going to do here. You roll it gently until it is five feet long. Five feet!

Once it is the length you need you begin twisting the cinnamon bread like you were wringing water out of a towel but very gently. After that it is spiraled into a giant circle and baked. While baking Noon Rogani turns into thin, crispy layers of dough with layers of spicy cinnamon sugar in between them. It's like a giant, flaky cinnamon roll.

One thing we did learn is that it doesn't keep well. Eat it soon after baking. Preferably while still warm.

If you like your cinnamon a little on the spicy side always add a pinch of chipotle to the sugar-cinnamon mixture. The smoky heat compliments cinnamon very well. Also, McCormick has come out with a roasted cinnamon that is amazing. Roasting seems to mellow out the flavor and add some depth.

How are you enjoying the A to Z challenge so far? I am really amazed that I have been able to keep  up. As I write this, and edit my images of my Noon Rogani adventure, I am at my son's house just on the outskirts of Las Vegas. I'm knocking out work while everyone is asleep — one of the perks of being a freelance writer is that you can work anywhere. We are visiting for a few days and it's my first time here. He has beautiful views of the mountains and as I have been writing I've been watching the full moon set and the sun begin to color the mountain tops a fiery gold. It's beautiful and I much needed time away from normal life. Of course I am still working but that's one of the downsides of being freelance writer. If you want to pay bills you take working vacations.

Anyway, this bread is fun to make and really good. Yes, it's cinnamon bread but with a nice, little twist (see what I did there?) 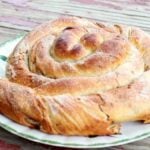 Print Save Go to Collections
Prevent your screen from going dark
An unusual, flaky cinnamon bread that is formed into a spiral before baking. Break off pieces of the spiral and eat it warm.
Prep Time: 1 hour 30 minutes
Cook Time: 45 minutes
Total Time: 2 hours 15 minutes
Servings:1 10 inch loaf
Calories:
Author:Marye Audet-White
As an Amazon Associate I earn from qualifying purchases.