Something like a cross between pizza and the best grilled cheese you ever had, this Khachapuri recipe is super simple to make. It's a great lunch or simple dinner. You can freeze the shaped Khachapuri either baked or unbaked for up to three months.
Total time 1 hour 12 minutes
Jump to Recipe

Think of it like the best grilled cheese you ever had.

Khachapuri is a crusty flat bread filled with cheese from Georgia, and when I say Georgia I don't mean the state where they grow peanuts and say y'all.

Geography was so much easier when I was a kid. A huge chunk of the world was just referred to as the Soviet Union and that was that. I find myself having to look up locations more and more! Thank God for Google Earth, right? Anyway, Georgia is situated between Russia and Turkey and it's traditional foods reflect both Asian and Greek Influences.

Khachapuri has a chewy crust similar to pizza but is filled with cheese and often topped with an egg toward the end of baking.

Since the cheese traditionally used isn't available here I've taken a teensy liberty and replaced it with a combination of smooth, creamy Muenster and Smoked Gouda.

The traditional cheeses that are used are generally more like Feta, with a salty-briny taste. Muenster with Feta would be a close match.

The yeast dough is divided. I suggest using a scale to get them even sizes.

The dough is then rolled into large circles, spread with the cheese, and the sides are tightly rolled in toward the middle, leaving a two inch or so space in the center.

The ends are pinched together and the loaf takes on a leaf shape.

When it comes out of the oven it is piping hot with gooey cheese and chewy crust. Serve it with a salad or soup for a lunch or simple dinner.

It doesn't take a lot of time to make. The initial rising time is just 45 minutes and after it's shaped it's baked immediately.

Start to finish this should only take you a little over an hour. Although I have not tried it, I suspect that you could freeze the shaped bread, baked or unbaked, without any problem.

I adapted this Khachapuri recipe from Saveur. With the combination of cheeses that I use it tastes like a combination between pizza and the best grilled cheese you ever had. 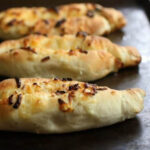 Print Save Go to Collections
Prevent your screen from going dark
Something like a cross between pizza and the best grilled cheese you ever had, this Khachapuri recipe is super simple to make. It's a great lunch or simple dinner. You can freeze the shaped Khachapuri either baked or unbaked for up to three months.
Course Appetizer/Snack
Cuisine German/Eastern European
Prep Time: 1 hour
Cook Time: 12 minutes
Total Time: 1 hour 12 minutes
Servings:6
Calories:449
Author:Marye Audet-White
As an Amazon Associate I earn from qualifying purchases.