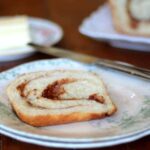 Nothing makes the whole house smell better than homemade bread baking in the oven!

❤️ Why you'll love it

Homemade cinnamon bread is an easy white bread with a gooey cinnamon and sugar swirl in the center.

My recipe is topped with more cinnamon and a thick blanket of buttery vanilla glaze to make it extra special. You can add raisins or dried cranberries if you like them.

Be sure to read to the end where I share how to get your bread to rise into the big, soft billowy loaves you love.

Homemade bread is best the first day but you can wrap it tightly in plastic wrap and store at room temperature for up to 3 days.

You can freeze this delicious cinnamon bread for up to 4 months.

Expert Tip: Knead in ½ cup or so of raisins for old fashioned cinnamon raisin bread. You can also just sprinkle them on the cinnamon sugar mixture before rolling.

If you've never worked with yeast dough before I suggest reading my complete guide to working with yeast doughs before you start this recipe. It has a ton of information that will make you an experienced baker in no time!

Do you have to use buttermilk?

It's not hard to find a cinnamon yeast bread recipe on the Internet. There are plenty of them and they are good but when you add buttermilk the texture of the crumb becomes pillowy soft and it just takes the cinnamon swirl bread right over the top. Really, you have to try this!

What if I don't have buttermilk?

If you really need to use regular milk just omit the baking soda and substitute the milk in equal measure for the buttermilk.

What is the best cinnamon for cinnamon bread?

I really like Vietnamese cinnamon but if you can find Korintje it is really deliciously flavorful.

Can I freeze cinnamon bread?

Yes, you can. Don't glaze it, though. Let it cool to room temperature then wrap it tightly and freeze for up to 3 months. I like to slice it before freezing and add parchment paper between the slices to keep them from sticking together. That way when I want a slice of toast I don't have to thaw the entire loaf.

Once you start making this homemade cinnamon bread recipe you'll be hooked!

I love, love, love making bread. Here are some of my family's favorite recipes.

How about these easy egg bites with a buttery slice of cinnamon bread toast on the side?

Finish up with a hot caramel latte.

Next time try this Mexican Day of the Dead Bread. It's traditionally served the first week of November but the slightly sweet flavor is delicious any time!

The one thing that gives people the most trouble with bread dough is getting bread to rise properly. Usually it's something simple. Here are my favorite ways to get those big, puffly loaves -

Get ready to wow your family! This cinnamon swirl loaf is so good! It makes any day a special one.

And the cinnamon toast is out of this world!

If you love this recipe please give it 5 stars! ⭐️⭐️⭐️⭐️⭐️ 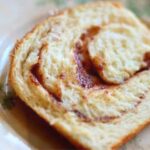