A rich, honey and orange flavored yeast dough is coiled, brushed with a simple syrup and sprinkled with honey granules then baked for a delicious breakfast or brunch treat.
Total time 35 minutes
Jump to Recipe

This Homemade Honey Bun Recipe is perfect for a special breakfast or a sweet snack. A rich, light yeast dough is flavored with honey and orange, then topped with a honey simple syrup and honey granules. It's a honey of a recipe, y'all!

I stalk old cookbooks. Thrift shops, antique stores, garage sales, online venues - I don't care how stained and falling apart it is I will buy it. Let me define old though. My favorite cookbooks are those written between 1920 and 1970, especially if there are notes jotted alongside the recipes. Anything before 1920 tends to be a pain to convert and anything after 1970 is just... eh.

During those five decades people knew how to entertain, families sat down for two and sometimes three meals a day together. Men wore suits, women dressed up, and children knew how to behave in stores. (Ok, full disclosure on that statement - last week I was shopping for clothes at Nordstrom's and these three boys were running in and out of the clothes "shooting" each other while the mom calmly continues to shop. This went on for at least 30 minutes. This would be bad enough in Wal-mart but Nordstrom? Ugh) I just think that for the most part people had a more gracious  lifestyle and I love it.

So, this recipe is an adaption of a Honey Bun recipe from a 1950 book called, Cooking for American Homemakers. It is called a Honey Twist in the book. If you are trying to make recipes from pre-1970 cookbooks you are going to have to adapt them or, as you probably already know, they won't work. It's because so many ingredients are different than they were. Even basic stuff like flour and milk are different. I had to make this a couple of times to get it right but once you make it I think that you'll agree that this...is...right.

The crumb is fluffy and sweet with a strong honey flavor and a delicate hint of citrus. The crust is beautiful and the shape is pretty enough for a holiday brunch, I think. You can slice and serve it as is, with butter, with cream cheese - whatever you like. I like marmalade.

Mexican Day of the Dead bread is another recipe with a sweet orange flavor - give it a try, too.

Don't ya just want to pick at that glaze? YUM!

I have been working on this recipe on and off for years and I really think I have it perfected. Give this homemade honey bun recipe a try and let me know what you think!

Then try these cinnamon rolls! 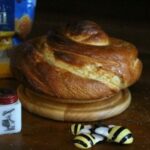