Mention bacon and I will start salivating. Bacon is the stuff that dreams are made of - an aroma and flavor that tempts even the most dedicated vegetarian.

I should know, I was once a dedicated vegetarian. I will agree with anyone that says bacon is good with almost anything - except Jack. Jack-in-the-Box came out with a bacon shake that Ethan and I had to try.

Try it we did and at first sip I found my mouth filled with scorched vanilla. There wasn't much bacon (if any) but they had added a glug of artificial smoke flavoring to a vanilla shake. Imagine drinking a vanilla shake as you were leaving a burning building.

Just because you can doesn't mean you should. However...candied bacon in cookies and breads, crisp bacon in side dishes, bacon on the plate? I heart it all.
While I was on my very-much-needed vacation I was planning on making bread.

The house was still basking in the aroma of the bacon I had cooked for breakfast and I had the drippings left in the pan - I hadn't put them in a container yet. (You do save bacon drippings, right?)

The plan was to make bread for toasted cheese sandwiches and and all of a sudden I wondered what it would be like to use bacon and bacon grease in the bread.

I will tell you what it was like - it was AWESOME.

The bread is fluffy and delicious; all of the flavor and texture of good homemade white bread.

The bacon flavor is delicate at first, intensifying as you eat. And, with this bread, the flavor is stronger when it is cool than when it is warm.

It was amazing as part of the grilled cheese. It was amazing toasted and buttered the next day. Three loaves lasted less than 36 hours. Imagine this as the base of bacon, lettuce and tomato sandwiches or topped with caramelized onion.

No brand of bacon is the same so taste a slice before you make the bread to see if you will need to add more or less salt.

I used a sponge method with this. All that means is that you don't add all of the flour. You only add enough to make the dough gooey and then you let that rise. It is important that you not add salt or fat at this point because those ingredients will keep your bread from rising well.

Once the sponge has risen then you will stir it down and add the bacon fat, salt, flour and other ingredients as directed in the recipe.

This time you will want to knead it until it is smooth and elastic and only a little sticky. Adding too much flour will make the bread heavy so be careful.

Form the dough into a ball and oil it. Put it into an oiled pan and let it rise (or proof) in a warm place for about an hour, or until it has doubled. Not sure if it is ready? Gently poke your finger into the dough. If the indent remains it is ready for the next step.

If not? Give it a little longer.

Punch the dough down and cut it in three equal parts. A scale will come in very handy for this. Form each part into a loaf and place it in well greased bread pans.

Oil the tops and cover them with a tea towel.

Put them in a warm place to rise again.

This time you want them to come just to the top of the bread pan or a little over it. They will rise more in the oven.

Brush the bacon bread loaves with a little of the bacon grease or butter and place them in the preheated oven to bake.

Let the loaves cool out of the pans. Put a towel over the bread as it is cooling for a soft crust or cool it uncovered for a more crisp crust. Slice it when it is cool.

Try not to eat an entire loaf. 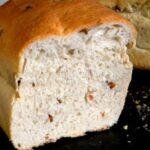