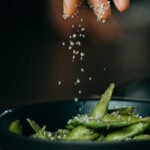 When you hear the word, “salt” what do you think of?

If you are like most people you think of a blue canister filled with an easy flowing, granular substance.

And that IS salt... but it's not the best, nor the only kind!

Recipes rarely call for any specialized salt at all, and in the past home-cooks rarely considered any other possibilities.

After all, salt is salty and that's that, right?

There are a lot of different varieties of salt and each contributes a different flavor to a dish.  The differences are subtle but they are definitely there!

Table salt is a finely grained salt crystal with additives in it.  The additives keep the salt from caking together and keep it free flowing even in the midst of the most humid summer on record.

Table salt also has iodine, a mineral that is added to keep the thyroid healthy.  The additives and iodine change the flavor of table salt and can make it harsh and bitter.

It dissolves quickly, is inexpensive, and is used in every day cooking.

Kosher salt is the perfect, all purpose salt.

It is flavorful without being harsh and the larger crystals allow the flavor to be more distinct from the food. Kosher salt comes in two types of crystals, fine and coarse.

The large surface area of the salt crystals allows kosher salt to season meat to perfection without over salting. It can be used at the table as well as in cooking and baking.

Some of the more common uses for kosher salt are:

Sea salt is another type of salt that has iodine.

The difference between sea salt and regular table salt is that the iodine in the sea salt occurs naturally.

There are hundreds of different brands of sea salt and all are made in much the same way and derived from an ocean or sea.

Sea salt is harvested by channeling sea water into large bins made of pure clay. The water is allowed to evaporate leaving just the salt crystals.

Since sea salt isn't as refined as some of the other types it commonly contains minerals like:

There are other trace minerals in it as well.

Sea salt has a delicate flavor and makes a good all purpose table salt. It normally comes in three grinds, from fine to course.

Italian sea salt is produced off the coast of Sicily. It has less sodium chloride than table salt.

The salt is gathered in the same way as regular sea salt.

Its delicate flavor lends itself best to use as a finishing salt, to be added once a dish is complete. It is wonderful in salads, on sliced sun ripe tomatoes with a little olive oil, or sprinkled on to meat just before serving.

Celtic sea salt is harvested from the Atlantic Ocean off the coast of Brittany, France.

It is harvested as it has been for centuries, with wooden rakes. Traditionally no metal is supposed to come in contact with the salt to maintain the purest and most delicate flavor.

Use for daily cooking or as a finishing salt.

Literally “flower of the sea” Fleur de Sel is made up of salt crystals that form naturally on the surface of the salt evaporation ponds.

These crystals must be harvested under specific conditions.

Most Fleur de Sel comes from Guerande , France. The flavor is unusual and delicate. The texture is almost crispy.

It is a finishing salt used in salads, vegetables and grilled meats as well as to top some desserts such as caramels.

Grey sea salt is a salt that is collected in the same way as Celtic sea salt and from the same area.

It is a purplish gray color. This color comes from the inclusion of clay that is found in the salt flats where the salt is collected.

Grey salt is one of the best quality finishing salts available. It is wonderful on salads, sprinkled on flavored butters, or used on vegetables.

Black salt has a sulfuric flavor and is used primarily in Indian cooking.

The flavor is reminiscent of eggs and is sometimes used by vegans to add an eggy taste to salads and tofu dishes.

In traditional Indian dishes it is used in fruit salads, chutneys, and raitas.

Black salt is not a sea derived salt but is mined from the earth. It's usually not used as an all purpose salt because of the flavor.

Hawaiian Red salt is colored with natural iron oxide which imparts a subtle flavor to it.

It is a finishing salt that is perfect for grilled meats.

The iron oxide causes the salt to be any color from red to pink, depending on the amount of the mineral in it.

Smoked sea salt is exactly that. It's sea salt that has been smoked in various ways with different types of wood to add an additional layer of flavor.

It's fabulous as a finishing salt on salads and vegetables.

Although Himalayan Pink salt is harvested from the foothills of the Himalaya Mountains it is technically a sea salt.

It is a marine fossil salt formed eons ago. It carries numerous trace minerals and is a delicious and beautiful finishing salt to sprinkle on something just before serving.

Which salt is used for cooking?

You can really use any of the salts for cooking and baking. You may need to use a grinder to grind the crystals smaller, though.

Is there blue salt?

I've never seen it but yes there is! And I bet it's pretty! Persian blue salt is produced from a single seam running through an ancient salt lake bed in Iran.  It's very rare and expensive.

Expert Tip: If your recipe calls for kosher salt but you're using table salt be sure to reduce the amount by about ¼th. Since the salt crystals are so much smaller in regular table salt your dish will be extra salty if you don't.

Experiment with different salts in these recipes!

These are not the only types of salts available but they are some of the most popular among chefs and gourmets.

Experiment on your own with these salts.  Try them sprinkled on fresh salads, fruits, and even very sweet desserts to add a gourmet touch to everything you prepare.