Super tender, this slow cooked shredded beef in red eye gravy is a little spicy, a little sweet, and very yummy. Use it in buns, tortillas, or spooned over rice, mashed potatoes, or grits!
Total time 8 hours 15 minutes
Jump to Recipe

This slow cooked shredded beef simmers all day long in an ancho infused red eye gravy like you've never tasted before. After 7 hours in the crockpot the beef is shredded and cooks for awhile longer to soak up even more of the gravy flavor.

This post was written by me through an activation with HireInfluence on behalf of Community Coffee. Although I received compensation for participating in the campaign, all thoughts and opinions are my own.

We are at the very edge of football season which means tailgating parties, game day parties, and lots of yelling at the TV. In Texas football is second only to religion - and that's iffy. I've known pastors to cut sermons short on the Sundays that the Cowboys were playing.

So, I don't know how it is where you are but tailgating parties have been perfected here. Grills, smokers, ice chests, and folding chairs are all lugged to whichever stadium the big game is being played in. Some people get there super early in the morning to get things started and by game time it's just one big party.

Personally I prefer staying home and watching the game from here. I am not a people person and have an aversion to crowds and large, loud parties.

Either way, great food is one of the game day requirements. The easier it is, the better. This slow cooked shredded beef is super easy and very, very yummy. Totally guy approved.

A seasoned rump roast is browned in a heavy skillet then removed from the pan. Hot coffee is added to the hot pan along with some honey and a little lime juice. As you stir that together you scrape up any crust from the meat that might be clinging to the bottom of the pan.

Congratulations. You've just made Red Eye Gravy, a southern staple. It's usually served with ham and sometimes chicken. I love it for this slow cooked shredded beef, though! The acids in the coffee tenderize the beef as well as add a unique flavor. It's SO good, y'all.

Once you've made the gravy it's a matter of blending in re-hydrated ancho chiles, adding everything to your slow cooker and setting it on low for 8 hours. The shredded meat is delicious on slider or hamburger buns, hoagie rolls, or tortillas.

Obviously with a recipe that's this simple the ingredients matter. Well, they always matter but when there's just a few things like in this slow cooked shredded beef they REALLY matter. I used Community Coffee's Dark Roast coffee and made it double strength. I wanted to have a nice kick of coffee flavor in the meat. If the coffee isn't flavorful the meat won't be either.

Community coffee is available for purchase at grocery stores throughout the Southeast region of the United States. If you can't find it locally you can get it at CommunityCoffee.com. You can also follow them on Facebook and Twitter 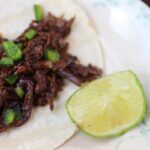 If you liked this slow cooked shredded beef recipe you may also like...