Creamy corn chowder with a Southwestern kick! Corn and Hatch chiles are simmered in a silky cumin scented broth for a filling soup that is both soothing and spicy.
Total time 15 minutes
Jump to Recipe

Hatch Chile Corn Chowder is creamy, rich, and just a little spicy. It's perfect for the chilly, drizzly autumn days ahead. It's quick and easy to make and it honestly gets better the next day. You might also like another of my favorites - Mexican Street Corn Soup! 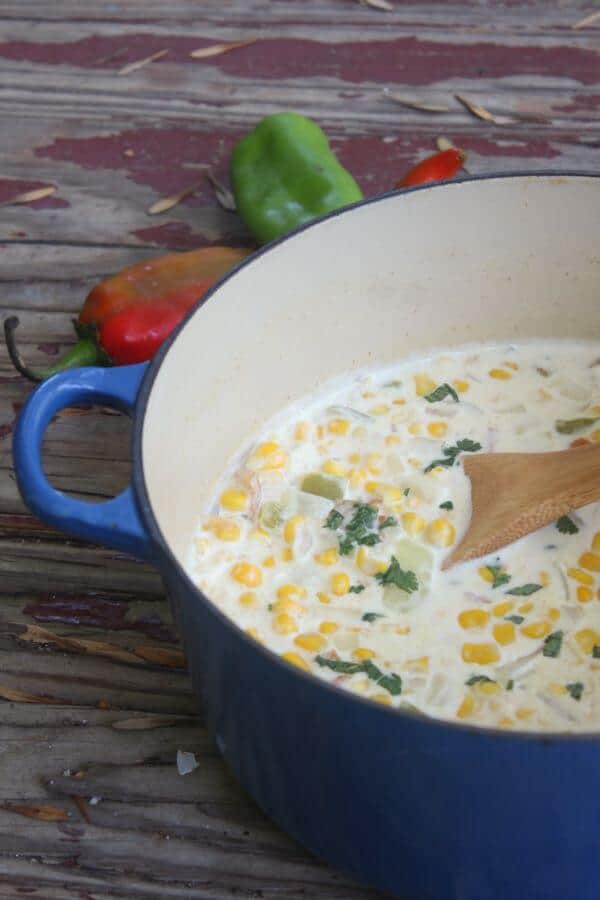 I love soup. When I was little we had the canned kind and we had it often. My  mom was a wonderful woman but cook she was not. When Dad was on one of his many business trips out of town dinner was soup and sandwiches more likely than not. She did make a homemade potato soup that was amazing - I still use the recipe - but anything else?

Oh, I am not complaining. I loved soup then and I love it now. It's just that I really had no idea that you could make soup without the use of a can opener until I was in my own home and in my own kitchen. It was an eye-opening experience. 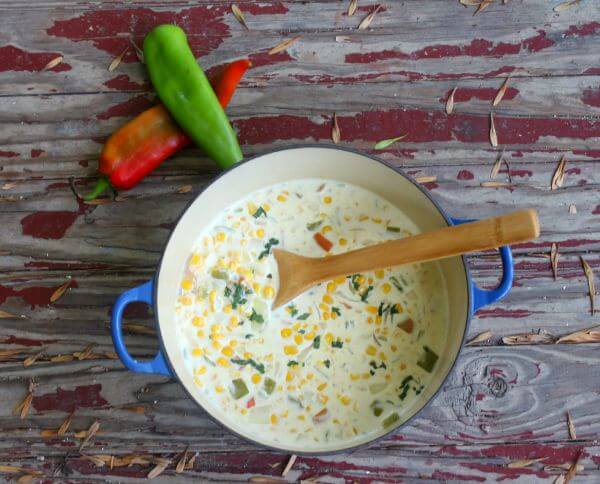 Since that time I have made a lot of soup and experimented with a lot of recipes. This easy Hatch Chile Corn Chowder recipe is one of my favorites. My oldest daughter's favorite soup is corn chowder but I think she likes this version even better than the original. Hatch chiles have a distinctive flavor but if they are unavailable poblanos work just fine. If you like a little extra heat you can even pop some canned chipotle in adobo in there but be careful!

How to Roast Hatch Chiles 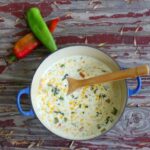 Print Save Go to Collections
Prevent your screen from going dark
Creamy corn chowder with a Southwestern kick! Corn and Hatch chiles are simmered in a silky cumin scented broth for a filling soup that is both soothing and spicy.
Course Soup
Cuisine Southwestern
Prep Time: 5 minutes
Cook Time: 10 minutes
Total Time: 15 minutes
Servings:6
Calories:
Author:Marye Audet-White
As an Amazon Associate I earn from qualifying purchases.

If you liked Hatch Chile Corn Chowder you may also like...