An authentic, chewy Jewish rye bread with caraway seed that is the perfect base for those midnight pastrami sandwiches - and the heartburn that goes with them. Has that slightly sourdough flavor that makes it perfect. Freezes well.
Total time 2 hours 15 minutes
Jump to Recipe

Jewish rye bread — you can't make a decent Reuben without it, right?

The perfect loaf of Jewish rye has a dense, chewy texture with a sour-ish flavor that is almost sourdough but not quite. There's an elusive something that makes it Jewish rye and not pumpernickel or some other type of rye. Guess what?

This bread has that elusive something.

Jewish rye bread is not an ancient, traditional bread of the Jewish people. It is, in fact, nothing like the traditional European ryes. Traditional rye bread was made with a sourdough starter, 100 percent rye, and baked for long hours in the cooling wood-fired ovens. It allowed the bakers to get the most out of their ovens - the bread cooked overnight in the residual heat from the day's work. About the time there were a lot of immigrants to America gas and coal ovens were becoming more available to the bakeries. These ovens could cook the bread fast at an even temperature. The rye that baked so beautifully in the European wood fired ovens did not fare so well in the quick cooking gas ovens so the bakers started adding part white flour to the rye and it became known as Jewish rye.

There were a couple of years when I was a kid that my dad worked in NYC. He took the train in everyday, got off at Times Square where his offices were (I think) and went to his office in the top of a very tall building. I know this because my dad believed in take your daughter to work day long before it was popular. He would randomly give me the day off from school to ride the train with him and make the walk from the train station to his office. Just before we got to his office we always stopped at this deli to have a bagel slathered with a thick swirl of cream cheese.

After the bagel it was a few more steps to the office building and through the doors with a smile to the doorman. My dad seemed to know everyone from the deli guy to the doorman by their first name and they always called me "Miss" which made me feel very sophisticated and grown up.

When it was time for lunch we nearly always went back to the deli. He'd order us the same thing — corned beef or pastrami, peppery and spicy and salty, piled high on thick slabs of Jewish rye bread that had been warmed and then finished with a schmear of grainy mustard. Paper thin slices of Swiss cheese were draped languidly over the meat in the most tantalizing way. They were thin enough to see through but added that burst of sharp flavor that you need with a rich deli meat like pastrami. A pickle and a handful of potato chips finished up the plate. Two, black cherry Doctor Brown's sodas were pulled from a tub of ice. They were so cold that the first sip was full of slushy bits.

There were times we went to fancy restaurants, my dad was a food adventurer, but my favorite times were at that little deli. This Jewish rye bread is very similar to what I remember. It always takes me back there.

What makes Jewish rye different from other rye breads is the liberal use of caraway seed. It really is the perfect sandwich bread — unless, of course, you're having peanut butter and jelly.

If you've never worked with rye I can tell you it is a pain in the butt to work with. It has gluten but in such a small amount that it is difficult to get it going. Using 2 parts bread flour to 1 part rye is the answer. You get the nice chewy texture from the gluten and the flavor of the rye. It still requires extra kneading so be prepared to knead this stuff by hand for at least 10 minutes.

You can make Jewish rye bread in bread pans, shape a round loaf, or make it in the traditional oval. If you are making it for the first time try the bread pans. They give it a bit more structure. If you make it round or oval be sure to slash the tops. I like to gently rub a little flour onto the top. I just like how it looks.

When I made these Jewish rye bread loaves I misjudged on the size and they turned out really huge. In the future I'll make this recipe into three or four loaves. 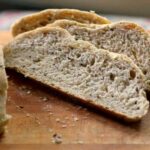 Jewish Rye Bread and the Secret to Getting It Right

Print Save Go to Collections
Prevent your screen from going dark
An authentic, chewy Jewish rye bread with caraway seed that is the perfect base for those midnight pastrami sandwiches - and the heartburn that goes with them. Has that slightly sourdough flavor that makes it perfect. Freezes well.
Prep Time: 1 hour 45 minutes
Cook Time: 30 minutes
Total Time: 2 hours 15 minutes
Servings:3 loaves, 10 slices each
Calories:
Author:Marye Audet-White
As an Amazon Associate I earn from qualifying purchases.

If you liked Jewish Rye Bread you may also like...

Heidleberg Rye  Tangled Up in Food