Quick and easy, this homemade Cool Whip doesn't break down when mixed (gently) with other ingredients or  at room temperature for an extended period of time. You can hold it in the refrigerator, tightly covered, for up to 3 days. Keep in mind that whipped toppings are sweeter than whipped cream so you may want to add a bit more sugar to get a sweeter result.
Total time 5 minutes
Jump to Recipe

So many summer desserts call for Cool Whip that it's almost an essential ingredient to have in the freezer this time of year. If it isn't available where you live or you prefer to stay away from it you'll be glad to know that homemade Cool Whip is easy to make and works as well in nearly every recipe. This particular recipe does not call for gelatin so is fine for vegetarians.

Cool Whip Was a Basic Ingredient in the 1960s!

I grew up with a constant supply of Cool Whip in the freezer, especially in summer. It went in Jello salads, frozen pies, on top of strawberries, and hundreds of other recipe that my mother came up with. It often went into my mouth on a spoon, to be honest.

When I had my own kitchen I moved away from many of the ingredients of my mid-century childhood - things like cream of mushroom soup, margarine, and ... yep... this stuff.

The thing is whipped cream, while certainly rich and luscious, doesn't hold up well for any length of time. In fact, it's often deflated and watery by the next day.

Why this Recipe IS Simply the Best

This homemade Cool Whip won't do that. It will hold up for several days and can be gently mixed into many different desserts. A big plus for me is that it doesn't contain gelatin and can be thrown together in seconds. Store it in the refrigerator tightly covered.

Heck, you can even store it in an old Cool Whip tub. I've been making this recipe since sometime in 1980 and it's my favorite for when I'm not using plain whipped cream.

What Are the Ingredients for Cool Whip?

When this easy dessert topping was first invented in the mid-1960s it didn't contain milk products and was truly dairy free. Luckily homemade Cool Whip has ingredients that you can actually find in the store and even pronounce.

This is likely one of the easiest recipes on Restless Chipotle so no need for extensive instructions but there are some tips that will make it even easier AND some cool (whip - get it? cool whip?) variations.

When you know how to make Cool Whip you'll have a fresh version any time you happen to need it!

Thanks so much for being a part of Restless Chipotle!

The main thing you'll need for this is a good mixer. When it comes to whipping cream or egg whites nothing works better than a Kitchen Aid.

There are a lot of things you buy that you actually can easily make at home - and they taste so much better! Here are some more of the copycat recipes found here on Restless Chipotle.

This quick and easy Homemade Cool Whip recipe is a great substitute for Cool Whip in no-bake pies and desserts, as a whipped topping, or as a filling for cakes -although for cakes you might want to use a little more instant pudding mix and Confectioner's sugar instead of superfine sugar. If you love this recipe please give it 5 stars. 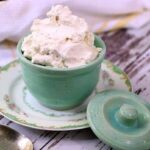 Print Add to Collection Go to Collections
Prevent your screen from going dark
Quick and easy, this homemade Cool Whip doesn't break down when mixed (gently) with other ingredients or  at room temperature for an extended period of time. You can hold it in the refrigerator, tightly covered, for up to 3 days. Keep in mind that whipped toppings are sweeter than whipped cream so you may want to add a bit more sugar to get a sweeter result.
Course Dessert
Cuisine American Copycat
Prep Time: 5 minutes
Total Time: 5 minutes
Servings:24
Calories:80
Author:Marye Audet-White
As an Amazon Associate I earn from qualifying purchases.

Submit Your Own Images