Flour tortillas are fried and covered with cinnamon and sugar then covered with four kinds of chocolate and caramel.Cooking it on the grill makes it the perfect outdoor dessert recipe.
Total time 15 minutes
Jump to Recipe

Grilled dessert nachos make a fabulous, easy, warm weather dessert. Yes, I know there is still snow on the ground in some areas but warm weather is coming, I promise.

The grill is the icon of summer in America — and we’ll toss nearly anything from steaks to pizza over the flame. We’ll even grill dessert! It’s the perfect way to get dinner on the table without turning the kitchen into a sauna, at least here in Texas. No one wants to cook inside when it is 109F.

I know I don't. And with these grilled dessert nachos I don't have to.

My dad had apparently been sprinkled with some sort of magic dust from the grill gods at birth. He had a knack for coaxing the flavors out of steaks and hamburgers that would have made the Pied Piper hang his head in shame. The entire neighborhood bowed to his mad skills and neighbors eyed our patio with envy when they were downwind from the bewitching tendrils of smoke that wafted enticingly across the fence.

He was frustrated by the fact that, not only would Dad not play his game, my dad would not even acknowledge his attempts. The knowledge that his entire family (including the dog) stood at the fence drooling whenever we cooked out probably didn't help.

One Saturday he must have finally had enough. Dad was getting the grill set up and Mr. F. called to him over the fence in one of those tones that sounds friendly but makes you want to move the knives to a lock box. “Grilling today, Bob?”

Dad looked up and smiled. “Yep, sure am. Burgers. You?”

Mr. F’s ego inflated like a Puffer fish. You could tell he figured he finally was going to out-do Dad. “I’m grilling dessert,” he smirked. “Cherries jubilee.”

Dad smiled and went back to his basting.

We were sitting at the kitchen table eating those perfectly smoky burgers when we heard sirens, followed by excited voices. It seems that when Mr. F. tried to finish off the cherries jubilee with flaming brandy he caught his siding on fire. His fancy grilled dessert was marinated with several hundred gallons of pressurized water.

The idea of doing dessert on the grill without having to call the fire department intrigued me from that point on.

These grilled dessert nachos take just a few minutes. The gooey, sweet combination of caramel and chocolate is balanced by the crunch of pecans and cinnamon dusted tortilla chips. Make it even easier by using commercial tortilla chips for a sweet – salty combo.

And I haven’t had to call the fire department at all. 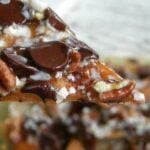 Print Save Go to Collections
Prevent your screen from going dark
Flour tortillas are fried and covered with cinnamon and sugar then covered with four kinds of chocolate and caramel.Cooking it on the grill makes it the perfect outdoor dessert recipe.
Prep Time: 10 minutes
Cook Time: 5 minutes
Total Time: 15 minutes
Servings:8 servings
Calories:
Author:Marye Audet-White
As an Amazon Associate I earn from qualifying purchases.