Fudgy brownies, creamy fudge pudding, rich cheesecake flavored pudding, and toffee are layered in a bowl then topped with a cloud of sweet whipped cream. It's a quick and easy show stopped of a dessert!
Total time 35 minutes
Jump to Recipe

Create this decadent chocolate dessert from scratch or use mixes to make it super quick and easy! Whether you call it a Brownie Trifle or a Chocolate Punch Bowl Cake it's a showstopper! Layers of fudgy brownies, creamy chocolate fudge pudding, cheesecake filling, and toffee are crowned with a cloud of whipped cream and garnished with more chocolate. It's a make ahead dessert that's absolutely addictive. 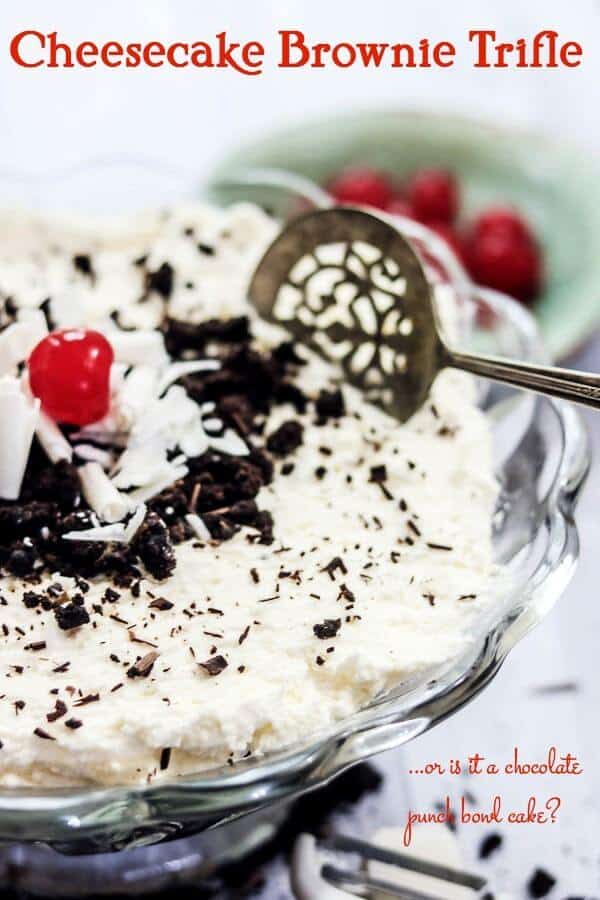 Although, like most Southerners, I had grown up with punch bowl cake (and you've GOT to read THAT story) I had never heard of "trifle" other than in the context of something small that didn't matter. As in, "Goodness, I'm a trifle nervous about this party!"

When I was a junior in high school that all changed. I began dating a boy who had recently moved to the United States from England and between the accent, the shyness, and the cultural differences I was totally head over heels in love. Once I met his mom - and totally clicked with her - it was pretty much a given that I was going to spend the rest of my days dreamy eyed listening to him talk.

It was a given as far as I was concerned -- the future had other ideas.

Anyway, I spent a lot of time over there. A week or so before Christmas I was eating dinner with them and she put a glass pedestal dish on the table. Through the thin, transparent crystal I could see the most glorious layers of cake, fruit, custard, and whipped cream that I'd ever encountered. I knew that it was something like a punch bowl cake but I'd never seen ANYTHING like this.

Being a neophyte foodie, well before I knew what it meant, I asked what this delectable concoction was and how to make it. And that, my friends, is history. Oh, and she is also the person that introduced me to quiche and Harvey's Bristol Cream Sherry....

I still make trifle in my mom's punch bowl (seriously - go back up and read the story!) because honestly, chocolate punch bowl cake - brownie trifle... I say tomAYtoes and you say tomAHtoes...

The main thing is that you want to make this asap because it's delicious.

Recipe Rated: SUPER EASY - anyone can make it

How do you make easy chocolate trifle?

Trifle is such a simple dessert it's unbelievable. You can make all of the components from scratch or you can use boxed mixes OR you can even buy ready made cake and puddings. Essentially you just need to put the components together as follows -

The main idea is to make a lot of layers and make them pretty. Sometimes that's easier said than done!

What is traditional English trifle?

Tradition English Trifle is a layered dessert made with ladyfingers soaked in sherry, berries, custard, and whipped cream. My boyfriend's mom also added a jello glaze over the fruit and she used poundcake rather than ladyfingers. Obviously, like me, she was a rebel.

How long does trifle take to set?

If you make it the traditional way with fruit and Jello then you'll want to let it set in the refrigerator for at least two hours. I think pretty much ALL trifles are better if they've been refrigerated for a couple of hours, anyway.

Can trifle be frozen?

No. And seriously - this is so quick and easy to put together that there's no real need to. You can make it a day or so ahead of time.

This is probably the easiest, most decadent chocolate dessert on the planet but there are a few ways to make it quicker and easy - as well as a few things you should know.

You May Also Need...

What’s new? A brand new store full of things to help you make the recipes, celebrate the days, and create the memories! Check out Restless Chipotle & Co. As always, thanks so much for being a part of Restless Chipotle!

Do you prefer the British style with a traditional Trifle Dish or Southern Style with a punch bowl? Either way - this is one dessert to have in your "I need a amazing dessert stat!" file.

I love chocolate - and if you thumb through the blog for awhile it will become VERY clear that I do! Here are some of my favorites -

This decadent chocolate dessert is so easy and it goes together quickly. It's fancy enough for the holidays and easy enough for potlucks and unexpected guests. You can even make it a day ahead of time! Be sure to read through the cook's notes above for variations and tips. Please give this recipe 5 stars - thanks! 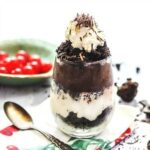 Since this recipe has several variations the nutritional info is only an estimate based on about a ⅓ cup serving. This is not diet friendly!