Apple pandowdy is something like a pie and something like a cobbler but uniquely delicious!! Tangy apple filling is simmered in a spicy sweet sauce and then baked with buttery squares of crust.
Total time 1 hour 15 minutes
Jump to Recipe 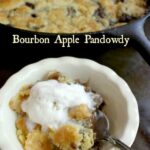 This easy all-American dessert must have been created by some frustrated cook that just couldn't get their pie crust right!

An apple pan dowdy recipe is like a very casual apple pie.

It's a simple, old fashioned dessert that will have you smiling over every sweet bite.

Pandowdy (pan dowdy) is perfect for those of us that have trouble with pie crust - there's no bottom crust and the top is made up of squares of pastry sprinkled with coarse sugar crystals for a little sweet crunch.

It's a cozy fall dessert your family will love.

Cover tightly with plastic wrap or spoon into an airtight container and keep in the refrigerator for up to 4 days.

You can freeze this for up to 3 months for longer storage.

It is not a beautiful dessert but it is a comfortable one. Think of it as a skillet apple pie.

While Anne Shirley would have certainly eaten it Jay Gatsby never would have. Bourbon Apple Pandowdy, served warm with a scoop of ice cream melting into the syrup is comfort food in the strictest sense of the word.

What's the Origin of Apple Pandowdy?

Pandowdies were well known in Colonial America and into the 19th century. According to an 1849 cookbook the dish was known as a pandowdy in the north and a brown betty in the south.
It evolved, like so many dishes, from recipes that were handed down through the centuries and no one really knows where it began.

What does pandowdy (or pan dowdy) mean?

We think it got the name because the top crust is cut up or "dowdied".

What are the best apples for apple pandowdy?

Using a combination of apples will give you the most flavor. Choose a mixture from the following:
HoneyCrisp
MacIntosh
Granny Smith
Braeburn
Winesap
Regional Heirloom varieties
Find more information about the different flavors of apple varieties in this article from the University of Illinois

I love a good apple dessert in the fall! Here are some of my favorites here on Restless Chipotle.

What is apple pan dowdy you ask?

Well, some would say that it's a dessert born in Colonial America, made of apples and dough but I say it's a godsend for those who can't get a pie crust onto a pie without it falling apart.

There is no bottom crust and the top crust is cut up pie dough or biscuit dough.

For my recipe a thick layer of tender apples is simmered in a bourbon and cinnamon spiked sugar syrup with a little chipotle to kick up the heat.

Then large squares of buttery pastry are dropped on top and the whole thing is baked.

Part way through the baking time you push the pastry down into the apples so that it soaks up all of that sweet and spicy sauce.

I like to drizzle a little maple syrup over the top, too. I mean, YOLO, right?

This recipe uses a tweaked pie dough that bakes crisp, buttery, and crumbly.

It's made in an iron skillet where the apples are simmered in a rich, flavorful sauce before the pastry is put on and the whole thing is baked.

When it comes out of the oven the crispy pastry is swathed in the thick, spicy sauce so every bite is crumbly-crispy and tender-sweet. The tiny bit of chipotle I add sort of kicks you at the end of the bite just to let you know it's in there.

You don't have to add it.

I usually put the iron skillet on top of an old baking pan to catch any juices that might overflow.

Don't wait to try this recipe!

It's especially good if you have an orchard nearby where you can go apple picking.

There's something about the fresh, snappy flavors that give this apple dessert a little extra oomph.

If you love this recipe please give it a 5 star rating. ⭐️⭐️⭐️⭐️⭐️ 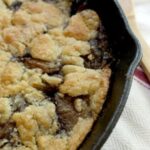 Print Save Go to Collections
Prevent your screen from going dark
Apple pandowdy is something like a pie and something like a cobbler but uniquely delicious!! Tangy apple filling is simmered in a spicy sweet sauce and then baked with buttery squares of crust.
Course Dessert
Cuisine Amercian Heritage
Prep Time: 35 minutes
Cook Time: 40 minutes
Total Time: 1 hour 15 minutes
Servings:10
Calories:525
Author:Marye Audet-White
As an Amazon Associate I earn from qualifying purchases.

Using a combination of apples will give you the most flavor. Choose a mixture from the following: Tips