Searing the meat before adding it to the slow cooker, using just a little water, and cutting thinly are the reasons this roast is absolutely mouthwateringly delicious!
Total time 8 hours 10 minutes
Jump to Recipe

This marinated round roast is another classic your family will love!

You want the meat to be tender and juicy? You want it to have a lot of flavor?

Searing is the key to delicious roast beef.

It's a simple step that most people skip but if you take 5 minutes of you time to do it you'll be rewarded with the best flavor. Here are simple step by step images and instructions.

Rump roast is delicious in the crockpot as long as you don't drown it with water. The trick to this cut of beef is to either dry roast it in the oven or use just a little water in the slow cooker and then slice it super thin.

I like using the slow cooker method. It means I can cook this meat all year without worrying about heating up the kitchen, plus I love being able to walk away from it and not think about it for hours.

There are a couple of main things to watch for if you want the best beef roast of your life...

What's the difference between rump roast and chuck roast?

Rump roast is also a much leaner cut.

How much will I need?

Since there isn't a lot of fat on this you can plan on about 2 ½ pounds for four people - that will be plenty. I'd get a little extra because the leftovers are good for so many things!

Do you really have to brown the roast before putting it in the crockpot?

Although recipes sometimes don't tell you to brown the rump roast before adding it to the slow cooker there are advantages to taking a minute to do it. Searing the meat gives it a crust, helps it develop more flavor, and just makes it better overall.

Since y'all know we're from Texas it should come as no surprise that beef takes up a big part of our grocery bill. Here are some of my other favorites from here on Restless Chipotle.

Rump roast is what Sunday dinners were made of. When you see those gorgeous images of plates of beef and gravy, mashed potatoes on the side?

The first time I made this dish I was newly married, just shy of my 20th birthday, and without much cooking experience. My family life, growing up, was unique - and not something I necessarily wanted to emulate so I hungrily watched Father Knows Best, Leave It to Beaver, and other mid-20th century sitcoms to see how it should be done.

My husband was in the military so when he'd go to work at 4 am I'd cook like crazy until I came up with something edible, then I'd throw out everything that didn't work by 12 noon so the kitchen looked and smelled normal by the time he walked in the door.

I wasn't sure about many things but I knew that families were supposed to have Sunday Dinners and I was determined not to be outdone by Mrs. Cleaver.

I decided roast beef would be the perfect way to show of my newly formed cooking skills.

I wasn't sure how much meat to buy, but he ate a lot so I decided 4 pounds looked about right for the two of us. I followed the recipe carefully and, lo and behold, it smelled (and tasted) amazing when it was done.

It was just that I had to make him drive back to the base and pick up 6 of the unmarried guys because apparently 4 pounds of beef feeds a lot of people. 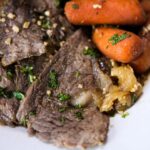 How Much Will I Need?

Since there isn't a lot of fat on this you can plan on about 2 ½ pounds for four people - that will be plenty. I'd get a little extra because the leftovers are good for so many things! Here's a handy chart -

I like to serve homemade cloverleaf rolls and this quick hot chocolate cobbler made in the microwave for dessert.

We'll never share your email or send you spam. Pinkie swear.
« How to Make and Use a Bain Marie
Haystack Cookies »