Tender, center cut pork chops and cabbage are braised in wine until they are combined into a perfect marriage of flavor.
Total time 6 hours 20 minutes
Jump to Recipe

Braised pork and red cabbage is slow cooker comfort food. Pork is slow cooked until it is butter tender and the flavors of the spices have permeated every atom-- it's good!

You might think that a recipe like braised pork and red cabbage isn't Texan but you'd be wrong.

The Hill Country area (and oh! how I want to move there!) was largely settled by German and Czech people. Like the state itself, Texas food has many origins and variations.

In the 1840s thousands of German immigrants came to Texas with the idea of starting a new life in the new Republic. They had been encouraged by a letter than an earlier immigrant Friedrich Ernst had written back home several years earlier. It had been published in a German Newpaper and was instrumental in bringing Germans here. Ernst described the glories of Texas in so much detail, and with such enthusiasm that people decided it was the place to be. Who could blame them?

So they settled in the Hill Country and created towns like New Braunfels, Fredericksburg, and Luckenbache - of course there are hundreds of others I could mention.

These communities have preserved a lot of the Germanic culture and, most importantly, food. If you haven't been to this area of Texas you should go. It is one of the most gorgeous places on Earth - I tell ya I really want to move there!

So, back to the braised pork and red cabbage. It's sort of German, sort of Alsatian, and all the way delicious.

The pork gets very tender and the cabbage gets sweet. Apples add a nice, tangy balance to the flavors and wine cuts through the richness of this dish. There's no way to explain it, you'll just have to try it.

You'll want thick center cut chops for this dish. Do get a good Bordeaux. Cheap wine doesn't do a thing for the final flavor of your recipe. The leftovers will literally be better than the original meal.

This stuff is to die for! Pork and red cabbage is not supposed to be a refined dish. Keep the vegetables in larger chunks to maintain the texture. A side of buttered red potatoes and some gingerbread to finish turns this meal into a celebration.

Making pork and red cabbage is only time consuming for the slow cooker - oh, and if you are wondering about how traditional the chili is in this dish? Well, this IS Texas - isn't it? Try it. If you don't like it make it again without the chili 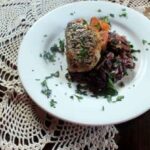 You can add the peeled garlic cloves whole when you put the rest of the ingredients in the crockpot. They'll cook right down. Be sure to take the bay leaves out and mash the garlic before serving!

If you liked Braised Pork and Red Cabbage you may also like...