This onion bacon jam recipe is sweet, tangy, spicy, smoky, and most of all -- delicious! Perfect on cracker, on slices of french bread, or on your favorite hamburger! Loosely adapted from an Arubian recipe called zult.
Total time 40 minutes
Jump to Recipe

This Onion Bacon Jam appetizer is perfect for the holidays because it's so versatile. Sweet caramelized onions, smoky bacon, rich maple syrup, and spicy chipotle are simmered until the mixture becomes thick and jammy.

I was looking at information on Aruba - just because I think it would be a cool place to go someday and I came across a recipe called Zult.

The name doesn't sound romantic at all and actually once I started reading the recipe I decided that there was no way Zult and I could ever be friends but I could create a twist on that recipe.

I mean, it called for pigs' ears and that's not on my "wow I always wanted to eat that!" list.

I fried bacon then caramelized onions in the grease.

Toward the end I added some chopped garlic, too.

Once the onion was caramelized I added the bacon back in along with red wine, maple syrup, balsamic vinegar, and the spices and I tried to stay pretty close to the flavors called for in the Zult.

I simmered that for about 30 minutes, it may take a little longer for you or even a little less time. Just watch it carefully and stir once in awhile to keep it from sticking.

One the liquid has evaporated and the mixture is thick and jammy remove it from the heat and let it cool.

I spread the original Ritz crackers with cream cheese, topped with a spoonful of the caramelized onion bacon jam recipe then sprinkled it with bleu cheese.

The cream cheese helps to keep the cracker crisp and the salty bleu cheese balances out the sweet and spicy notes. It's one big bite of fantastic and it's super easy! 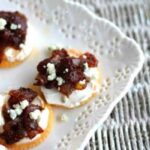 Print Save Go to Collections
Prevent your screen from going dark
This onion bacon jam recipe is sweet, tangy, spicy, smoky, and most of all -- delicious! Perfect on cracker, on slices of french bread, or on your favorite hamburger! Loosely adapted from an Arubian recipe called zult.
Course Appetizer
Prep Time: 5 minutes
Cook Time: 35 minutes
Total Time: 40 minutes
Servings:8
Calories:
Author:Marye Audet-White
As an Amazon Associate I earn from qualifying purchases.