Homemade bourbon cake recipe from a vintage cookbook. This easy recipe is about as Southern as you can get! Pecans add a buttery richness to the moist bundt cake and top the sweet bourbon glaze. Soaked in bourbon, too! The baking technique is what makes it so good. Easy recipe.
Total time 1 hour 55 minutes
Jump to Recipe

A good bourbon cake recipe is one of those things that's handed down from generation to generation here in the south. I found this unusual bourbon pecan pound cake in one of my early 20th century cookbooks with a hastily scrawled star next to the title in faded blue ink. It's so buttery and moist, and it is bursting with bourbon flavor. The pecans add texture and that smooth buttery pecan flavor. I think you'll love it as much as that long ago baker did! This post has been updated from the November 2016 original. Last updated March 2020.

Now, most of the alcohol in the actual cake bakes out but it's soaked in bourbon after it comes out of the oven. Then an uncooked bourbon glaze goes over the top. In other words, I would have something "kid friendly" like this old fashioned buttermilk pound cake on the menu as well.

I love this bundt pan by Nordic Ware. It's simple and elegant - perfect for any occasion. Nordic Ware produces heavy bakeware that lasts just about forever. It's my pick as far as manufacturers go - and they have some fabulous designs. This is just one of them.

This bourbon pecan pound cake is SO good. I just love it... but here are some more of my favorites!Chocolate Mayonnaise Cake

Christmas Fruitcake - I know... but this one really is amazing - sweet and sticky like candy.

Few holidays in Texas aren't celebrated with copious amounts of alcohol. This Southern bourbon cake certainly has that. It's a dense cake that has a strong bourbon flavor mellowed with the addition of buttery chopped pecans. Then more bourbon is poured over the warm cake, and finally a bourbon butter glaze is drizzled over the top.

Be sure to get a good bourbon because that's where all the flavor is going to come from. I use one or another that's distilled in Texas like Garrison Brothers or Firestone & Robertson. Use something you like.

My very first experience with bourbon cake was when I was about 17 and working in the Jr. Department of Joske's. It was just before Christmas and I was invited to a Christmas party at the home of one of my co-workers. That table was laden down with all kinds of appetizers, cookies, desserts... you name it. It looked like something out of a Dicken's novel. Right smack in the center of the table was a crystal cake dish with a bundt cake on it. It all looked scrumptious.

Now, most everyone there was an adult. I started working at 14 by lying about my age. I worked from 3:30 to 11 pm after school and worked a 40 hour week. By the time I was 16 I was working full time and making a bit more than minimum wage (which was 2.25 an hour, by the way). I looked older and I think people forgot that I was so young. Anyway, back to the cake.

I took the slice I was offered and sat on the fireplace, carefully balancing punch and cake on my knee. Trying very hard to look sophisticated I took a took a bite of the cake. Right then and there my sinuses cleared up, my head blew off, and my eyes probably bugged out.

So much for sophistication.

By the time the party was over I had sampled the cake as well as numerous rum balls and bourbon balls. You've just gotta love Southern hospitality. Being rather mature I decided to call my dad to pick me up rather than try to drive home myself. I decided this after I tripped off the edge of the dining area into the sunken living room and landed on my face. Honestly, I am not excessively graceful so that could have happened without the rum balls, bourbon balls, and bourbon cake but I wasn't taking any chances.

Here's that easy bourbon cake recipe! Remember to use a good bourbon and let it sit at least overnight. 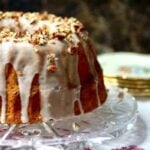 Print Pin Recipe Save Go to Collections
Prevent your screen from going dark
Homemade bourbon cake recipe from a vintage cookbook. This easy recipe is about as Southern as you can get! Pecans add a buttery richness to the moist bundt cake and top the sweet bourbon glaze. Soaked in bourbon, too! The baking technique is what makes it so good. Easy recipe.
Course Dessert - Cake
Cuisine American - Southern
Prep Time: 15 minutes
Cook Time: 1 hour 40 minutes
Total Time: 1 hour 55 minutes
Servings:16
Calories:566
Author:Marye Audet-White
As an Amazon Associate I earn from qualifying purchases.