An easy, quick brioche recipe that is rich and buttery even though it take a fraction of the time that conventional brioche do. It is just right for French Toast as well as hundreds of other things. Difficulty level: 3/10
Total time 4 hours 55 minutes
Jump to Recipe

What would you give for a quick brioche recipe? A brioche that is buttery, slightly sweet, tender, and takes only a few hours instead of the typical overnight rising is a valuable thing — if you love brioche as much as I do.

Brioche is traditionally baked in a fluted pan that looks like a big cupcake liner. It has a topknot and is cut in thick slices and spread with luscious things like sparkly, sweet raspberry jam or tangy orange marmalade. Sometimes you'll find it in individual sizes but this one is a braided loaf. It isn't difficult to make and it can be used to make the most mouthwatering French toast on the planet. You can make regular toast, too.

There's no way around it - any brioche is going to be high in fat from the butter and eggs, plus for this quick brioche recipe I've used cream rather than milk to give it even more richness. This is not low calorie and it's not supposed to be. It's a once in awhile treat so be sure to keep it that way or your hips are gonna tell the tale.

You don't have to braid this but it is pretty. After it has risen the first time press it down and roll it out into a loaf. Cut it into three strips but leave them together at the top. Now just braid the strips just as if it was your daughter's hair. when you get to the end fold it over and tuck it underneath. It really is that easy.

Use an egg glaze on this. It gives it a satiny finish and a beautiful color. I like to sprinkle the glaze with sugar but you can use sesame seeds or almonds or whatever you like the best. Like most bread it is important to let it cool before cutting to avoid crushing the crumb. I really hope you'll try this quick brioche recipe. It's a good one to have tucked in your recipe box. 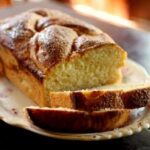 Print Save Go to Collections
Prevent your screen from going dark
An easy, quick brioche recipe that is rich and buttery even though it take a fraction of the time that conventional brioche do. It is just right for French Toast as well as hundreds of other things. Difficulty level: 3/10
Course Bread
Cuisine French
Prep Time: 2 hours
Cook Time: 40 minutes
Rising/Resting: 2 hours 15 minutes
Total Time: 4 hours 55 minutes
Servings:12
Calories:182
Author:Marye Audet-White
As an Amazon Associate I earn from qualifying purchases.