A whole wheat sweet bread with orange and vanilla flavors studded with candied cherries and dried cranberries is a welcome gift during the holidays. It makes the most amazing French toast ever.
Total time 4 hours 40 minutes
Jump to Recipe

This Viennese Christmas Bread Recipe, also called Viennese Striezel, is an impressive three layer sweet bread studded with candied cherries and dried cranberries. Flavored with Cardamom and orange, I've used whole wheat flour rather than the traditional white flour to give it a nutty, country flavor.

I have always loved working with whole wheat flours and I often take traditional white flour recipes and convert them.

Whole wheat flour not only adds that chewy texture and nutty flavor but it adds fiber, protein, and vitamins too. Most people run into the problem of heavy texture which usually means the flour hasn't been kneaded enough.

Many of my memories of Christmas as a kid have to do with smells as much, or even  maybe more, than sights or sounds. I can remember walking into our house after school in the dim winter light, my legs bright red from the cold (you wore dresses or skirts to school bach then no matter what) and feeling the blast of warm air scented with fruitcake or Christmas cookies.

It was the only time of the year my mom baked and she usually baked fruitcakes for all of her siblings, our neighbors, the milkman, the postman, and people I can't even think of right now. It was a generous time back then -- something I think we've lost for the most part. Maybe it's time to get it back?

When I bake during the Holiday season I feel connected with all of those memories. It makes my house smell wonderful so when MY kids come in from school I know that they are making Christmas memories similar to mine so long ago, and it's likely that they'll make these same memories for their kids. It's how the generations connect -- memories and recipes.

So, this Viennese Christmas bread recipe --- perfect for giving! Perfect for making memories!

European countries are known for their yeast breads and the sweet yeast breads that they create during the holidays are gorgeous.

At least I think they are from the recipes I've tried and the images I have seen -- I haven't traveled to Europe yet, although it's on my bucket list. Anyway, I think Austria has more of the Christmas bread recipes than some of the other countries -- at least I've seen more.

This Viennese Striezel is a braided Christmas loaf that really isn't difficult to make. The dough is flavored with cardamom, orange, and just a hint of vanilla to give it a little extra sweetness.

As I said, I've replaced the traditional white flour with whole wheat flour. I also used dried cranberries soaked in rum in place of the raisins in the original recipe which is in one of my go to vintage cookbooks, Farm Journal's Homemade Bread, circa 1969.

Believe it or not, I bought it at a used book store in 1975! It's falling apart, stained, and has half the cover gone but I still use it at least a couple of times a month.

You'll want to do this Christmas bread recipe on a day when you are going to be home all day because of the rising time (4 hours). Letting it rise overnight in the refrigerator is also an option.

How to Make a Braided Loaf

Braiding the bread makes for a pretty loaf and it's easy to do. You'll just need to divide the dough into nine pieces after the rising.

You are seriously going to love this Christmas bread recipe. It is a great gift, it freezes well, and it makes amazing French toast if you get tired of eating it with just butter. I like to give this in a basket along with a jar of orange marmalade and a tin of Vanilla Earl Grey tea. 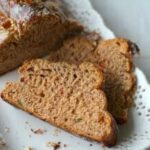 To Braid the Loaf

If you liked this Viennese Christmas Bread Recipe you may also like...