Sweet and salty, tangy and rich, creamy and crunchy - this cheesecake has it all covered. If you like Snicker's bars you love this version. Creamy cheesecake, gooey caramel, rich chocolate, and salty peanuts create magic right here!
Total time 55 minutes
Jump to Recipe

This Snickers Bar Cheesecake is full of all of the flavors of the candy bar -- chocolate, peanuts, and caramel are folded in to a vanilla cake batter. As if that wasn't decadent enough chunks of Snickers are added.

When I think of truly awesome cheesecake recipes it's not usually something plain. I like mixtures and layers of flavor and texture - like this Snicker's Bar cheesecake. Easy, basic, but unique and decadent in every way. Kyrie, Nick, and Matthew have always had their birthdays together - at least until Matt left home and ended up in the Middle East. Their birthdays are July 1, 3, and 11 so it was just easier to do it all at once. Each got to choose their own cake because we normally had enough people to handle all of that cake and ice cream.

This  year Kyrie chose a Holy Cow Cake but all Nick would say was that he wanted some kind of cheesecake with caramel. I couldn' t figure out what kind to make so I got my oldest daughter on messaging to help me brainstorm. We were tossing possibilities back and forth and all of a sudden she said Snickers Bars. 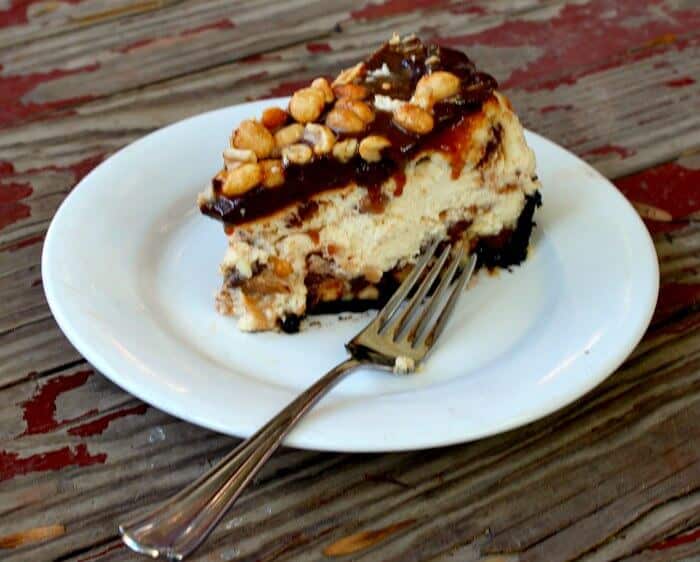 The Snickers bar cheesecake was a hit at the party. I used Oreos for the chocolate crust and sprinkled salted peanuts, caramel and chocolates on the top of the crust. I poured part of the cheesecake in, swirled caramel over it, then poured the rest of the cheesecake in and kind of swirled the caramel through the batter.

It was delicious. The piece that I hid for later was even in better. You know what they say about stolen honey being sweeter? Yeah, well, hidden cheesecake is the best.

Nick is now 14 and he asked for cheesecakes at every birthday. He is growing into quite a young man. He is quiet and empathetic - I guess I'd have to describe him as a social introvert. He loves being around people as long as he gets his time alone. He loves to draw - since Ethan left for boot camp Nick has taken over E's Bamboo pad and is really getting good on it. He is saving up for a computer and has worked his butt off this summer to earn money - sadly his diligence is limited by my income. He earned 85.00 the first week and I had to put him on hold!

I love that my kids are growing into men and women that I can be proud of but I hate that they are growing  up! I was telling a close friend at the kids' party that I feel like we've downsized. When we first became friends four of her six boys were at home and seven of my eight children were home. Over the years they have become family - helping me in so many ways through the divorce and aftermath, she and my other sidekick took care of details at my wedding, and on and on. The two of them have my back!

Well, now she has two at home and I have four at home. When we have parties we cry together over the kids that have moved on because it is all so different. I think she misses Ethan as much as I do - he probably spent as much time at her house as here at home.

So, enjoy your kids because they grow up and leave home much earlier than you will be ready for. In the meantime make some memories that they can take with them. Every time one of my kids comes home there is at least one dish that they ask for. Each has a different food that no one can make like mom!

Thank God I am still essential for something! 🙂 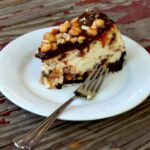 Print Save Go to Collections
Prevent your screen from going dark
Sweet and salty, tangy and rich, creamy and crunchy - this cheesecake has it all covered. If you like Snicker's bars you love this version. Creamy cheesecake, gooey caramel, rich chocolate, and salty peanuts create magic right here!
Prep Time: 10 minutes
Cook Time: 45 minutes
Total Time: 55 minutes
Servings:12
Calories:
Author:Marye Audet-White
As an Amazon Associate I earn from qualifying purchases.

Peanut Butter Cheesecake with a Pretzel Crust Bake or Break