A creamy, spicy barbecue sauce that has been around for at least sixty years. Once you taste it you'll know why.
Total time 20 minutes
Jump to Recipe

When you think of Texas food the first thing that has to come to mind is BBQ. Really awesome-good-damntastic barbecue with a great barbecue sauce, am I right?

I want to make one thing perfectly clear. You people in Alabama are doing it all wrong, bless your hearts. When I was there for the conference I had barbecue 3 times in two days - and it was pork.

Pulled pork is great but it isn't barbecue and sliced barbecued pork is just sort of weird to me. Here in Texas we barbecue beef, pull pork, fry chicken, and smoke turkey - just like God meant for it to be. Really good barbecue is created by excellent seasoning, long, slow cooking, and pecan wood. Now, I know someone is going to argue with me about the pecan and expound on the quality of mesquite but let's just make it clear from the git-go that you are wrong. Mesquite burns hot and fast - great for steaks but bad for slow cooking. Pecan wood is slow, deliberate, and delicate - wooing and sweet talking the meat until it is buttery soft and tender.

Try it, you'll see what I mean.

FUN FACT:
There are at least 7 regional BBQ sauces in the US. Each is different in texture, flavor, and ingredients.

Anyway, barbecue sauce does not go on the meat until after it's cooked. I don't care who you are. First, you soak it in a good local beer like Shiner or Rahr. Let it soak for an hour or so then remove it from the beer and pat it dry. Now you make yourself a good dry rub or buy one and season that meat generously. At that point go ahead and put it in the smoker or on the grill. Maybe a half hour before it's done brush it with your barbecue sauce if you want. Serve the majority of the sauce hot, in a bowl to ladle over the meat after it is plated.

This sauce may be a little different than you are used to. Yes, it has an enormous amount of fat in it - you're not going to eat it everyday (although after you taste it you might want too). The fat gives it a rich, smooth mouth feel that can't be explained. It's addictive. This might be the first barbecue sauce that you wanted to just eat with a spoon. 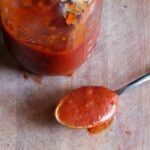 Print Save Go to Collections
Prevent your screen from going dark
A creamy, spicy barbecue sauce that has been around for at least sixty years. Once you taste it you'll know why.
Prep Time: 5 minutes
Cook Time: 15 minutes
Total Time: 20 minutes
Calories:
Author:Marye Audet-White
As an Amazon Associate I earn from qualifying purchases.

Do not at sauce to brisket until after it is smoked but use it during cooking when grilling ribs.

If you liked Damntastic Texas Barbecue Sauce you may also like...