Rich Kahlua chocolate bundt cake that is easy to make from scratch. Deep chocolate and coffee flavor make this easy cake something every one will like.
Total time 1 hour 55 minutes
Jump to Recipe

This homemade kahlua cake is so easy and completely from scratch. Rich, dense chocolate bundt cake is flavored with Kahlua, soaked in a Kahlua syrup after baking, and finally covered with ganache -- first a Kahlua Dark Chocolate Ganache then a Kahlua White Chocolate Ganache.

I love Kahlua. Almost as much as Baileys, as a matter of fact. In essence, I am saying that I like sweet, dessert-like, girly drinks. That works fine for me and always has since I am, of course, a girl. The idea of a Kahlua cake holds so many possibilities. Chocolate Kahlua? Spice Kahlua? Vanilla Kahlua? I think I have decided on all of the above but, as always, chocolate comes first in my life.

I noticed that it's pretty tough to find a recipe for Kahlua cake from scratch and not a mix. Well, this chocolate Kahlua bundt cake is a from scratch Kahlua cake. I know that cake mixes are handy and all but I just don't like the idea of not knowing exactly what's in them or how to pronounce it. You are rarely going to get convenience food recipes from my blog - it happens but just not that often.

Helloooooo.If you have an hour this cake can be in your belly. All of it...because you won't want to share.

The following are affiliate links. If you click through and buy something I'll get a small commission used for keeping the blog up and running smoothly. Thanks for being a part of Restless Chipotle!
Hershey's Special Dark Chocolate Cocoa, 8-Ounce Cans (Pack of 6) 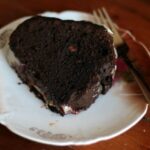