A mild cheese soup with a tiny bite of hot sauce made famous in Dallas in the 1970s by Baby Doe's Matchless Mine.
Total time 15 minutes
Jump to Recipe

A mild cheese soup with a tiny bite of hot sauce made famous in Dallas in the 1970s by Baby Doe's Matchless Mine.If you lived in the Dallas area in the 1970s or 80s you either went to Baby Doe's Matchless Mine Restaurant, wanted to go, or had been once and hated it. Whether the food was good or not was never the point — it was the going there. Preferably you were asked by a guy, preferably one that you liked, preferably one with a car (a Camaro or Trans Am), and preferably one that was at least 18 so you could get drinks. In the 1970s, with the drinking age at 18 we knew how to party.
And disco.

Anyway, it was the restaurant to go to so that you could tell your friends on Monday morning, "He took me to Baby Doe's!". It was the equivalent of the Jared's commercial. It made you special, desirable, and elite.

I was terribly shy, had a hard time talking to people, had a reputation that proceeded me - mostly false, and I worked three jobs through high school. I worked as an office manager for Corrigan's, plus had some of my art work in galleries, plus did window displays for some of the smaller businesses that couldn't afford their own visual merchandiser. I did have a couple of relationships but never was the kind of girl guys took to Baby Doe's.

I took myself. By myself. Being a rebel, being used to being the odd man out, and being used to having people think I was quirky I just went. Drove behind that famous waterfall billboard, found the steep road, and almost missed the turn. I pulled my '77 Monte Carlo into the valet area, smoothly swiveled the seat, and got out of that car like I was Farrah Fawcett, big hair and all. I walked into that place like I owned it and that night I did.

The cheese soup was (and is ) legendary. People, including myself, keep trying to replicate it because it was the one thing besides frozen Pina Coladas that they did well. The steak was awful, the menu was unimaginative, and service was iffy. If I was reviewing the place now it would get a really awful review — yep, I was a food snob even back then.

As I recall I wasn't alone for long and ended up on Northwest Highway later that evening dancing and watching the clock so as not to miss my curfew. A missed curfew meant my mom locked the door and I slept in the car.

I have been working on this on and off for awhile. I realize that after thirty plus years the way you remember something tasting and the way it really tasted are two different things but it seemed to me that if I got the delicacy of the cheese flavor right the beer was too strong, and vice versa. I thought about the 1970s and the ingredients they would likely use. I read every reference on the Internet to the soup, every recipe, and strained my memory.

The cheese had to be either Velveeta or Cheez whiz. I remember eating it thinking that it didn't taste like real cheese soup. I went with Cheez Whiz because the flavor is a little stronger than the Velveeta and I thought it could hold up to the beer. I remembered feeling that fat coating on my tongue - there was no way that was made with just milk, so I added half and half. Beer? What did all good Texans drink back then? Coors. It had to be. Every time I tried it with a dark beer (my preference) it was too yeasty beery.

So, this is the way I remember it. I hate using processed foods but in this case it is necessary. I did substitute a local amber ale for the Coors because I just prefer to support local breweries. I used Rahr Blonde Lager. So sue me.

By the way, if you haven't tried their beers you really need to. And Rahr? If you are reading this you really should invite me and a couple of guests to a private tour and tasting. You know... just because.

So, put on That 70's Show or Saturday Night Fever, dress up in some quiana or polyester, and take your favorite guy or chick out to Baby Doe's one more time. 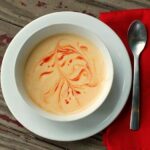 Print Save Go to Collections
Prevent your screen from going dark
A mild cheese soup with a tiny bite of hot sauce made famous in Dallas in the 1970s by Baby Doe's Matchless Mine.
Prep Time: 5 minutes
Cook Time: 10 minutes
Total Time: 15 minutes
Servings:12 servings
Calories:
Author:Marye Audet-White
As an Amazon Associate I earn from qualifying purchases.