Frozen red velvet German chocolate pie is a showstopper dessert that is unbelievably easy. You can make it well ahead of time and store in the freezer until you are ready to use.
Total time 20 minutes
Jump to Recipe

Frozen Red Velvet German Chocolate pie is a creamy sweet dessert that is a lot more impressive than it is difficult. It's one of those desserts you can make ahead and store in the freezer until you need it.

My version is a little different. I wanted it to be thick and creamy, have that classic red velvet flavor. It just seemed that the German chocolate and red velvet would go together really well. And, I wanted to have a crust that didn't get lost in all of the flavor I was planning to infuse in this thing.

Oh, one more thing. I didn't want to use fake whipped topping. Have you ever tried to find a recipe for frozen German chocolate pie that didn't include fake stuff? It's really, really hard.

I love the cake by the same name and I knew that this pie recipe was going to be a favorite if I could get it just right.

Did you ever wonder where the term German Chocolate Cake came from?

Back in the 1800's a man named Sam German developed a sweet Baking chocolate for Baker's Chocolate. The company named it Baker's German's Sweet Chocolate after Sam German. In 1957 a Dallas newspaper published a recipe for cake using this very chocolate. You can probably figure out the rest. German Chocolate cake is not German at all. It is actually German's Chocolate cake. I'm guessing that the pie evolved from that — since it has German's chocolate in it, too.

I made the crust with toasted coconut and toasted pecans. it gives it such an amazing flavor and is reminiscent of the traditional frosting and filling of the cake. As I was looking for my vanilla I came across the Red Velvet flavoring I had gotten awhile ago. I wondered how it would work and I decided to use it. I got it at Hobby Lobby, by the way. If you can't find the red velvet flavoring and you don't want to get it from Amazon you can use a tablespoon of red food color + ¼ teaspoon orange extract + 1 teaspoon vanilla instead.

This is a big pie. I used a 8-inch springform pan. You might need to add an aluminum foil rim on the top if you have too much filling. The amount of filling may vary a little bit each time you make it because of the volume of whipped cream. To make a collar with the aluminum foil cut a piece of foil long enough to go all the way around the pan. Fold in half lengthwise and wrap it around the top and secure it with tape. You will have added about 3 inches in height.

It's also a good idea to put the springform on a cookie sheet while you are baking it in case some of the butter melts out.

I promise you that this is amazing. It's easy to make and stores for a couple of months in the freezer (as long as you hide it really well). Whipped cream on the top looks really good but you don't really need it. The pie is rich and awe inspiring without it.
The following is an affiliate link. If you click on it and buy something then I get a small commission which is used to keep the blog up and running. Thanks so much for being a part of Restless Chipotle!

This is the red velvet emulsion I use for flavoring. It adds both color and a nice flavor to the dish. You may be able to find it at Hobby Lobby but if not you can get it online. 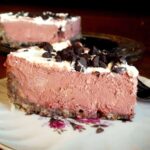 Print Save Go to Collections
Prevent your screen from going dark
Frozen red velvet German chocolate pie is a showstopper dessert that is unbelievably easy. You can make it well ahead of time and store in the freezer until you are ready to use.
Course Pie
Prep Time: 10 minutes
Cook Time: 10 minutes
Total Time: 20 minutes
Servings:10
Calories:
Author:Marye Audet-White
As an Amazon Associate I earn from qualifying purchases.