When it gets hot, and I know it’s going to, I do everything possible to keep the kitchen cool. When you have a 110F day you just can’t bake and keep the kitchen at a temperature that will actually support life.

The thing is that my family does not lose their sweet cravings just because it’s too hot to cook.

Icebox cakes, refrigerator cakes — whatever you want to call them — are totally the answer. You make them up to 24 hours ahead of time (anything more than that and they tend to get a little soggy), put them in the fridge, and there’s a nice cool dessert ready for whenever you need it.

[pullquote] The English Trifle, which has been around for centuries, the Charlotte that was so popular in Colonial America, and the ice cream cake which evolved in Victorian times are all part of the icebox cake’s family tree.[/pullquote] These no bake desserts showed up during World War I and by the 1920s, what with all of the newfangled foods and appliances, icebox cake recipes were on the back of many different products. People loved them.

Actually, they had been around awhile in different forms. The English Trifle, which has been around for centuries, the Charlotte that was so popular in Colonial America, and the ice cream cake which evolved in Victorian times are all part of the icebox cake’s family tree. They have been made with vanilla wafers, ladyfingers, chocolate cookies… and just about everything else you can imagine.

I have a couple of cookbooks by Ida Bailey Allen, a woman who wrote cookbooks and gave sage food advice in the 1930s and 1940s. She says this about refrigerator cakes, “Icebox cake is an adaptation of either a charlotte or Bavarian cream, or a mixture of both. It always calls for whipped cream in some form and freqently for butter. Nuts are often added and the mould is either decorated or put together with some sort of a cake mixture, as macaroons, sponge cake, angel cake, or lady fingers. In any case the dessert is so extremely rich that it should be served only in small quantities in a meal containing very little fat.” 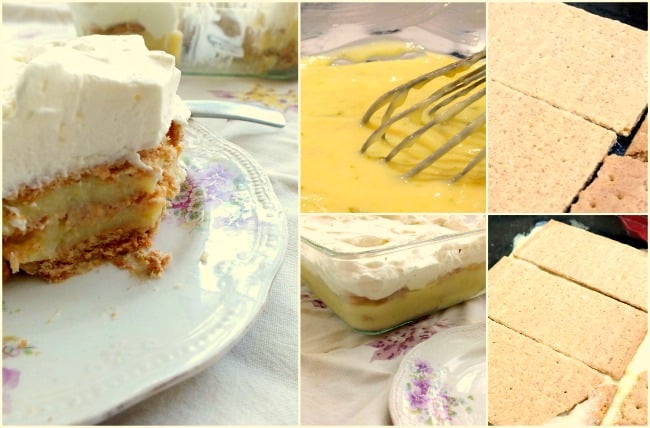 Now, you can’t freeze this but you could make the custard up to two days ahead of time and assemble it the day before you wanted to serve it. It really is so very easy that it is almost effortless. Don’t bow to the pressure of telling you that you can use instant pudding and get something just as good. Don’t you do it! It won’t be and you will save less than five minutes.

I love using the microwave for custards. Not only is it fast but they don’t scorch. You do need to watch carefully to make sure that it doesn’t overcook and curdle, though.

The graham crackers soak up just enough of the moisture to be firm without being gooey and soggy. The homemade custard is creamy without being runny and what happens is that the cake cuts beautifully and holds its shape. The spoon glides through the dessert and that first taste? Oh my. Tangy lime that makes your mouth water and pulls in the sides of you mouth is the first wave, then the graham cracker sweetness soothes and beckons you to taste a bit more. That’s when the whipped cream kicks in.

It is just so good, I promise. 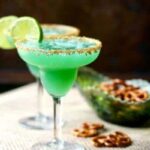 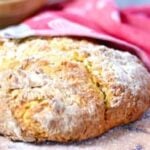 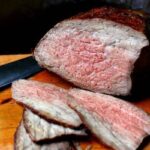