Homemade bacon cinnamon rolls! Thick cut,crispy bacon is rolled into the filling as well as sprinkled on the top of the decadent icing. Sweet-salty goodness
Total time 2 hours 35 minutes
Jump to Recipe

This Bacon Cinnamon Rolls recipe is a sponsored post written by me on behalf of Tyson Foods, Inc. All opinions are entirely my own.

If you love a salty sweet combination of flavors you'll go crazy over these homemade Bacon Cinnamon Rolls for Father's Day! Pieces of thick cut, crispy bacon are rolled into the filling as well as sprinkled on the top of the decadent icing. Get all of the crunch of nuts but with the extra goodness of smoky bacon!

Father's Day is just around the corner. It's more or less the one day a year we get to spoil my husband almost as much as he spoils us the rest of the year. To say that he is adored by the kids, grandkids, and me?

He came late to the party, so to speak. He stepped in shortly after the ex stepped out - and took on the challenge of the 6 underage kids that were still at home and, maybe the biggest challenge of all -- me.

The man did what he always does. He looked at what needed to be done and he just did it. When I say he can fix anything I'm not lying. He's John Wayne, Gary Cooper, and that other guy all rolled into one pretty amazing package and he's made no secret of the fact that the whole package is just mine. I love that.

He's brought me a dozen roses once a week since we met. Sometimes a couple of dozen.

He's a Texas man through and through. He likes meat and potatoes -- and he is suspicious of anything that his food might have one time eaten. Most of the Texas men I've met acknowledge only three food groups - meat, bread, and sugar. When it can be washed down with a good bourbon?

It is so much the better.

That's why these pillowy-soft Bacon Cinnamon Rolls are perfect for my Texas man for Father's Day. They hold all of those food groups - bacon, sweet dough, and cinnamon sugar. Not just any bacon, either -- good, old fashioned made-in-Texas bacon. Wright Brand Bacon has a Texas heritage - we like to call that "Texas Proud". It's made from thick slices of premium meat that's been naturally smoked and trimmed by hand. It has the bold, meaty taste that Texans love so when you stuff it inside these Texas-sized cinnamon rolls it doesn't get lost.

I'd say that sounds like something most men would like for breakfast, wouldn't you? Maybe even the non-Texans?

Deciding between the Applewood smoked and the hickory smoked varieties was tough. I kinda stood in front of the bacon display at my HEB store and shifted from foot to foot, thinking. The people at the store have helped me out more than you can imagine over the years and this recipe was no different.

"Just tryin' to decide between the hickory smoked and the Applewood for Father's Day."

A quick conversation about the merits of one flavor over another for cinnamon rolls ended in us agreeing that the hickory smoked would indeed be best AND me promising to bring in a sample of the finished product.

It's just the way we are around here. Everyone gets involved. 🙂

Now, I've seen bacon cinnamon rolls done a lot of ways but this is the way I like best. I like the crunch of nuts in my cinnamon rolls so I thought that simmering the bacon until crisp and adding big old pieces right in the filling would be the way to go. Basically I substituted the pecans in my regular cinnamon rolls with crispy bacon.

I wasn't wrong, y'all. The secret lies in slowly rendering off the fat - more about that later.

Then, since I wanted even more smoky bacon flavor I used a little of the bacon grease to brush over the surface of the dough before I added the cinnamon and sugar mixture. I greased the pan with the fat, and brushed it on the top. I wish you could smell the kitchen!

A decadent butter glaze is poured over the cinnamon rolls while they are still warm from the oven and then more crispy slices of salty bacon are sprinkled over the top. Omigosh, y'all, each soft, doughy bite is full of big, bold Texas flavor - salty, sweet, cinnamon-spicy, smoky... it's like eating the best churros you've ever had at a campfire in the middle of a clear West Texas night

Not gonna lie. It's worth every carb. Every last one.

How to Render Off the Fat on Bacon

All bacon has fat - it's part of what gives it SO much flavor and makes it crispy. The Wright Brand Hickory Smoked Bacon is very lean as far as bacon goes -- one of the reasons I love it. You'll need to render the fat off to get the crispiest bacon without scorching it for these bacon cinnamon rolls. It isn't hard to do but it will take a little time. You can do this step up to two days ahead of time - just keep the bacon and rendered fat in separate covered containers in the refrigerator until you're ready to use.

Yep. You'll make these yummy Bacon Cinnamon Rolls for Father's Day but I'm betting you'll make them again... and again...and again. Once you get tired of these give my humongous cinnamon rolls a try! 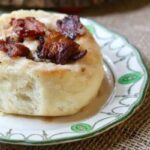